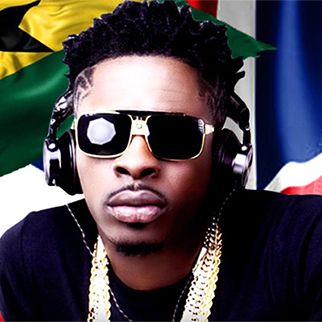 The 2014 Vodafone Ghana Music Awards Artiste of the Year winner and the versatile Shatta Wale is an amazing Dancehall artiste who doubles as an exceptional music producer, sound engineer and video director. In 2015, he successfully recorded and released ninety-nine (99) songs, an achievement yet to be recorded by any musician in recent times.

A Ga by ethnicity, Shatta Wale is a native of the Greater Accra Region, the nation’s capital. Growing up, he lived with his family in Laterbiokorshie, Dansoman and then later Korle Gonnor during his formative years. He will later move to stay with his friends in Nima, a “zongo” community in the national capital to rediscover himself musically.

His musical career began during his high school days at the Winneba Secondary School, then known as Doggy. After secondary school, he took time to harness his talent during which he learnt the rudiments of the trade.

Having achieved a street credibility in a fairly undeveloped Ghanaian dancehall genre at the time, he soon began making the headlines with his hit single, “Moko Hoo” which featured fellow Ghanaian musician Tinny. Then known in the industry as Bandana, the song earned him a Ghana Music Awards nomination in that year.

Bandana followed with back to back hit songs including the very popular 'No Problem' and 'Obaa Yaa'. At this point, he was receiving heavy rotation on radio and backed by a growing fan base which shot him into the mainstream Ghanaian music scene. He performed on every big stage and became a household name so far as Ghanaian music was concerned.

After a while, nothing was heard from Bandana as he disappeared from the music scene. He died in music, buried for almost a decade only to resurrect with a new name and identity, Shatta Wale. This was followed with a solid repertoire of hit songs in the last four years which immediately became the street anthems. He regained his darling boy status once again and got everyone shouting his name. Songs such as “Dancehall King” and “Enter The Net” were loved by both the young and old, almost everyone.

Shatta Wale’s energy on stage is phenomenon and his antics during his performances leaves his audience with memories which stays with them long after the event. Anytime he mounts the stage, his main aim is to get the audience excited and give them a show worth their monies. For this reason, he goes the extra mile to ensure his fans are satisfied by doing extraordinary performance at all times.

He successfully toured Canada and USA in the year 2014, had a European tour in 2015 and has shared the same stage with celebrated global music icons including Akon, Sizzla, Shaggy, Mavado, Popcaan, Jah Vinci, Tim Westwood and several others. He has collaborated musically with some of the finest African acts including Davido and Patoranking (both of Nigeria) and recently with award winning Afrobeat musician, Fuse ODG.

Shatta Wale wouldn’t stop getting nominated and winning awards. He was adjudged the 2014 African Artiste of the Year at the Nigeria Entertainment Awards (USA) and also won The World Best New Entertainer at the 2014 International Reggae and World Music Awards (IRAWMA). In 2015, he won the Best Male Musician at the maiden edition of the GN Bank Awards (People’s Choice Awards) in Ghana.

The man also known by a section of his fans as 'Country Boss' or 'Dancehall Commando', has written his name in the history books and will forever be remembered for his positive impact and contribution to building an vibrant African Dancehall genre.