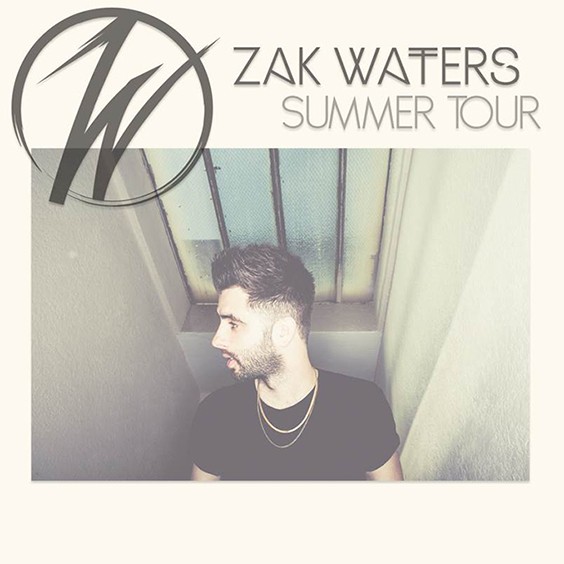 Triple threat Zak Waters always leaves a mark. Ever since he first formally began performing in high school, the Los Angeles singer, songwriter, and producer never failed to make a lasting impression on his audience, and it’s always three-pronged. Unlike his contemporaries. He can do it all from...

Triple threat Zak Waters always leaves a mark. Ever since he first formally began performing in high school, the Los Angeles singer, songwriter, and producer never failed to make a lasting impression on his audience, and it’s always three-pronged. Unlike his contemporaries. He can do it all from constructing a track to writing the lyrics to performing it live with his band or in a DJ set.

However, he's always been driving his own music. In 2011, he broke on to the scene with his independent debut EP, New Normal. He served as both the featured writer and singer on Madeon's hit dance single "The City," which hit #1 on Hype Machine and peaked at #4 on the Billboard Dance Chart, where it stayed for nine months. Meanwhile, his single with Candyland, "Not Coming Down," topped the Beatport charts as #1 track for two weeks. He's performed on AXS Live, Last Call With Carson Daly, and on KIIS FM. Meanwhile, he’s not only been personally sought out by Flo Rida and Benny Benassi for their upcoming 2014 tracks, but also by the likes of legendary songwriter Diane Warren and Atlantic Records artist Francisco for his production talents. He's produced official remixes alongside Benny Benassi, R3hab, Pharrel Williams for All-American Rejects, Adam Lambert, and Foxy Shazam Moreover, famed Los Angeles venue The Satellite in Silver Lake tapped him for a high-profile residency as well in September 2013.

His impact is about to expand immensely with the release of his forthcoming full-length debut album, Lip Service—available exclusively on Spotify via a unique deal in September 2013. Shimmying between soulful funk savoir faire and fresh dance floor-ready pop, he cultivates an immediately seductive, soaring, and shimmering style of his own.
He puts it best though, "My music is definitely meant to make people dance. I like to think of it as disco at its core. There are elements of EDM and R&B at the same time. You could call it neo-funk-pop. I'll take that as mine."

His personal panache punctuates the first single "Penelope." The song tells a cheeky little tale that's as vivid as it is vivacious.

"I kept listening to the track and going back to a vision of a young kid obsessed with his baby sitter and wondering where she's at now," he explains. "I think we all had that babysitter. My friend's sitter was so hot. She was 'Penelope' for me. Now, you wonder, 'Would she look at me differently now that I'm grown up?'"

Elsewhere, “Dear John” featuring Audra Mae is a smart rumination on breaking up, while “Over You” examines the some darker moments post-relationship. Waters tapes into real tangible emotion, extending beyond the feel good pop.”

There's one pervasive thread throughout. "It's all about wanting to have fun," he concludes. "The majority of my songs are upbeat. They're meant to be the soundtrack to somebody's wild night. I love when somebody tells me I made it onto their workout or sex mix. If I can encapsulate a time for the listener, I feel like I will never be forgotten.”