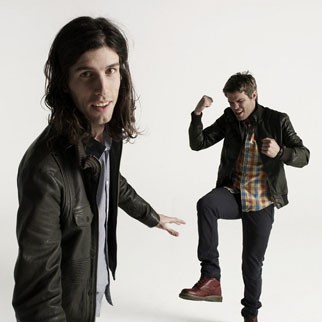 3OH!3 doesnt like to brag. Sean Foreman and Nathaniel Nat Motte say that making their loud, distorted, electronic-pop music is not about the trophies and notoriety. No, forming 3OH!3 (named after the duos area code in Boulder,Colorado) was always about something larger than themselves. It was...

3OH!3 doesnt like to brag. Sean Foreman and Nathaniel Nat Motte say that making their loud, distorted, electronic-pop music is not about the trophies and notoriety. No, forming 3OH!3 (named after the duos area code in Boulder,Colorado) was always about something larger than themselves. It was and remains about being FUN!

If we go back to the beginning, we can find Sean in his parents basement, clicking incessantly on his mouse for friend-requests on 3OH!3s sparkling new MySpace page. Meanwhile, across town, Nat is working on earth-shattering beats, hunched over his computer, in what he charmingly referred to as his dungeon apartment. There, in a pair of blown-out computer speakers, Nat brought to life what the world currently knows as 3OH!3. Those sounds and songs became the bands 2007 self-released album, which was handed off across the states until it fell through the mail slot at Photo Finish Records and into the hands of label president Matt Galle.

Blown away by Sean and Nats visionary production and clever lyrics, Galleimmediately flew the boys into scenic Beltsville, Maryland, to record with the brilliant producer Matt Squire. Feeling at home in the studio, Sean and Nat worked day and night, piecing together their 2008 success, Want. With the help of their furry little producer friend Benny Blanco, 3OH!3s first single, Dont Trust Me, crawled slowly up the charts for 15 months to attain a No. 1 spot at pop radio, going double platinum and selling over 2.6 million tracks in the process.

3OH!3 hates to brag, but if they had to they would tell you that they were nominated for Best New Artist alongside Lady Gaga, Kid Cudi, and Drake, at the 2009 Video Music Awards. Though they didnt bring home the moon man, Nat and Sean had just as much fun performing Dont Trust Me inRadioCitys hallowed halls. Nat was actually happy 3OH!3 wasnt announced best new artist as he claims he would have peed his pants, having not been able to find a bathroom all night. Drinks impair the ol judgment, he says.

These two guys are no strangers to national television either. Appearing multiple times on late night TV (Jimmy Kimmel Live and Last Call with Carson Daly) and alongside the glittery Ke$ha on American Idol, 3OH!3s learned a few things about working the camera.

I know 3OH!3 would never say this, but they are one of the best live acts in the business. Their dedication to putting on an epic and fun show every night was rewarded by a nomination for the 2009 MTV Woodies Performance Award alongside artists like Green Day, Animal Collective andPhoenix. These boys sell out shows from the rainy streets ofLondonto the Gold Coast of Australia, where, by no coincidence, their songs have gone gold and platinum and continue to sell by the thousands. Its no wonder that 3OH!3 has been invited to play legendary festivals likeReadingand Leads and Warped Tour again and again.

With such a non-stop touring schedule, it must have been a real relief to retreat to their mountain sanctuary in Breckenridge in January to record their next album. In a snowy cabin, far above the world, Sean and Nat went a little crazy, writing as many as two new songs a day for 14 days. We had all these songs built up over the past couple years, Sean says, and it was like a mental vomit of all the stuff we had been thinking. This was not gross-tasting vomit, however, this was like roses and gold and everything nice, finally let loose on the world. Before things got weird in the mountains, the boys packed up their gear and headed out to LA to start recording the album that would be known as Streets of Gold.

Back in the studio with the usual suspects Matt Squire and Benny Blanco, 3OH!3 took all they had learned from touring and experience and put it to use. There are some crazy sounds on this record, Nat says, it sounds like robots making love. Nothing says love like their first single off the record, My First Kiss featuring Ke$ha. It was like our first kiss with Ke$ha, Nat says, it was the first time we met her and she definitely used tongue. Within a few hours of being released on iTunes, My First Kiss jumped to the No. 2 on the overall song chart.

3OH!3 was very selective when it came to collaborating on Streets of Gold. Having greatly admired his work with Lily Allen and The Bird and the Bee, 3OH!3 sought out producer Greg Kurstin for their own music. I think Greg has attained a perfect synthesis of electronic and organic music in his work, and he was someone whom I really, really wanted to work with and learn from. Additionally 3OH!3 teamed with Benny Blanco's mentor, hit-smith Dr. Luke on My First Kiss and Streets of Gold (the title track to the record). With help from those production Titans, its a safe to say a few more songs off the album might lend My First Kiss some company at the top of the charts.

Streets of Gold is the album that 3OH!3 has been struggling to create for their whole musical lives. Showing a wide range of tastes from the car rattling battle raps of I Can Do Anything to the post-apocalyptic love ballad Love 2012 to the throwback casbah sounds of I Know How to Say3OH!3 has evolved into a super-human machine. With Nats surgical precision (Nat was destined to be a doctor after all, and has been deferring his acceptance to medical school for a few years) and Seans one-two punch lines, every song is bound to be permanently engrained in your head. We try to make music that is fun and comes across live, says Sean. This album is epic, says Nat, it has a little piece of everything we like and do. We write and co-produce all our own music, and it was so satisfying to apply all that we learned in the past couple of years.

On the road again, 3OH!3 is testing out the new tracks and making more friends. Weve played some of the new songs without a single fan knowing the lyrics, says Nat, And people are going fucking BANANAS. Its a great sign! There are many great signs for 3OH!3 as they take their journey on their own street of gold. Nat, as a writer and producer, has been working with other artists. Sean is keeping busy with his own cowrites including Ke$has platinum selling Blah Blah Blahand as a result was named the No. 9 Hit Songwriter in theUKby Music Week. The future is looking bright for these twoBoulderboys.

Nathaniel Motte and Sean Foreman are two very busy guys. If they arent filming mini-movies for the deluxe package of Streets of Gold, drawing comic books, or modeling (yes, they are Ford models), they are spending time with their friends or getting outdoors. Sean was crazy enough to sign up for the Chicago Marathon in October, running it to raise money for the American Cancer Society. And Nat is crazy enough to continue his deferral fromMedicalSchool at theUniversity ofColorado. What does the future have in store for 3OH!3? Were going toJAPAN!!! Nat answers.

Well, that might be true, but I have a feeling we will be seeing a lot more from 3OH!3 and then they will have a hell of a lot more to not brag about.