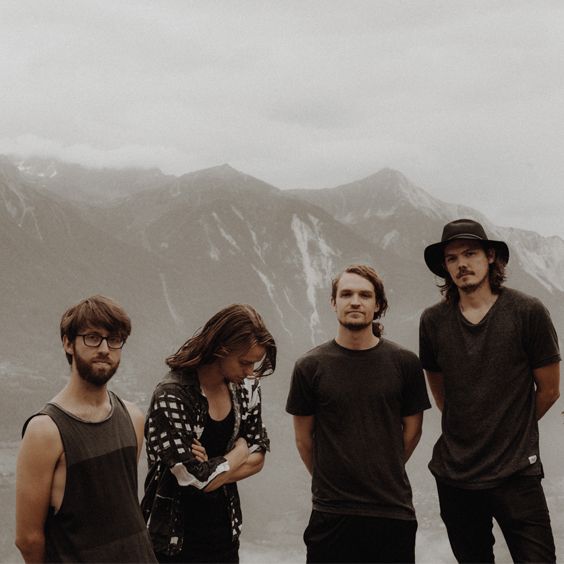 Honesty is the fabric of all our interpersonal relationships. It’s the levelling light that removes us from concealment and obscurity. For Half Moon Run, it’s been crucial to every step they’ve taken together. They never laboured under the notion that they would be successful musicians in a...

Honesty is the fabric of all our interpersonal relationships. It’s the levelling light that removes us from concealment and obscurity. For Half Moon Run, it’s been crucial to every step they’ve taken together. They never laboured under the notion that they would be successful musicians in a touring band. Nevertheless, when they formed in Montreal in 2009, multi-instrumentalists Devon Portielje, Conner Molander and Dylan Phillips abandoned every backup plan because they weren’t prepared to sacrifice their uncommon chemistry. Instinct and faith led them to create their astonishingly accomplished debut album Dark Eyes, released in 2012 (2013 in the UK).

Its follow-up, Sun Leads Me On, is the process of coming into being in the quest for beauty and honesty. For the three founding members—and for fellow multi-instrumentalist Isaac Symonds, who joined the band during the early touring for Dark Eyes—it materialised after months of creative frustration. After two years of relentless gigging, they got back to Montreal in late 2014 only to realise they were “oversaturated with each other and the band,” says Isaac. It was only through brute force and determination that they ultimately overcame the mental challenge of effectively starting over.

“Sun Leads Me On came from a place that felt a little bit like being underwater,” says Dylan. “We kept powering through because ultimately we knew it was worth it. We had this beautiful thing, this wonderful chance, but we were also working our way through a lot of darkness, losing lots of friends, struggles at home, losing our sense of home, trying to let the music guide us but having trouble even finding that. There was a lot of strife in it all, but at the same time the sun just kept pulling us forward, and we just kept powering through and trying to find beauty in what we do.”

The sun literally lead them to California. One night, on little more than a whim, they packed up the jam space and headed south. There they lit upon the mellowed sound of Sun Leads Me On, a sound which Devon finds to be a truer musical representation than its predecessor. “I think it’s a lot more honest,” he admits. “We went down to California and we were surfing every day. A lot of the tunes we were writing there just came out. Dark Eyes took us over seven months to record and we went through two or three recordings of each song, so the vibe got a little lost from what it initially was.”

Sun Leads Me On eschews the alt-folk melancholia of its predecessor in favour of a collective voyage of personal self-discovery. From the quaint downtempo cooing of “Warmest Regards” to the dark, danceable synths of “Trust” via the Bob Dylan-esque pluckiness of “Devil May Care”, it’s a more diverse, spacious and balanced album. It’s Half Moon Run rediscovering their connection to each other through music. Reparation figures heavily among its recurring themes, as does agency: “what a perfect day to take what you can get, to live without regret” sings Devon, during the wrought and aggressive strains of “I Can’t Figure Out What’s Going On”. It’s a singular feeling that’s best encapsulated in the breathy and heart-stopping crescendo of the title track. What starts as a personal journey expressed in Devon’s lyricism is reaffirmed by the shared experience of his bandmates as they pile on magnetising harmonies and ensemble arrangements.

The association of Sun Leads Me On with the idea of life as a constant instinctual movement towards the sun hits upon a principle that has guided the band since the very early days. Namely, the sense that there is a lucidity that can be found in life through a common goal and through honesty: honesty to yourself as much as with others.

It’s fitting that the album’s title should have been proposed by Devon, who says he didn’t necessarily consider a career in music from the very beginning, but was drawn on by an innate belief in Half Moon Run as something unique and illuminating in his life. The band’s history is littered with moments where everything could just as easily have faded into obscurity. Their first demo came about after a friend of the band, who was enrolled in a music production course, had to bring a group into the studio to record as part of a class assignment. Despite being of two minds about it, they went in and laid down an early version of “Full Circle”. The song brought them to the attention of Indica Records, who offered a deal. After consulting with a lawyer who advised them not to sign it, they walked straight over to label’s offices and signed anyway.

Around that time, Conner and Devon were also roommates, writing music and returning empty bottles to the store for change. As they were doing the rounds on the way to the store one day, Conner told Devon he was considering going home to British Columbia to train as a forest firefighter to pay off his seemingly insurmountable student debt. Devon appealed his decision on the grounds that such a big break in the band had the potential to wipe the slate clean. It was a moment of clarity for Conner, who changed his mind before they even got to the store.

Like the perpetual gaze of the sun, Half Moon Run is an ever-present force in the band’s lives, even when they aren’t writing, recording or touring. It’s a sentiment that all of them shared in the interim between Dark Eyes and Sun Leads Me On. This new album is the sound of a band with less to prove and more to say. From the sweeping arpeggios and grand harmonising of lead single “Turn Your Love” to the sophisticated new wave strutting of “Consider Yourself”, it’s a diverse body of work. At the heart of “Everybody Wants” is the deeply human paradox of yearning for normality and belonging while trying to carve out a unique identity.

Conner asserts that all origination in the song writing process was instinct rather than intellect: “When you’re in those initial stages, it’s mostly instinctive as you’re bouncing things off each other. It speaks to a deep part of yourself. It’s connecting with your human nature, tapping in to a part of your being that you don’t necessarily have access to intellectually, so when there’s a creative stream among people who are all doing it at the same time you can get something that sounds really unique, and it can communicate in more ways than you can on your own. Every so often there are moments when you feel meditative, like you’re transcendentally riding a wavelength.”

There’s no agenda to Sun Leads Me On. Like its predecessor it’s an album that doesn’t necessarily offer obvious singles because it’s not premeditated. Dark Eyes was circumscribed by a powerful awareness of the melancholy and hardship of early adulthood. It manifested itself as a highly lyrical alt-folk album, at times as bleak as Neil Young’s Harvest, at times as joyous as Simon and Garfunkel’s Bridge Over Troubled Water. By contrast, Sun Leads Me On is whimsical, strange, more personal but conversely more relatable. It’s a pop album, but one that is fed by the esoteric musical literacy of its creators. Devon and Isaac listened to ambient music almost daily. For Dylan and Conner it was classical music. It’s all manifested in the reserve, space and pace of the record. Half Moon Run aren’t afraid to get off the beaten track so long as they remain guided by beauty. The beatific Arcadian piping of opener “Warmest Regards” announces this album, the brief classical sounding arrangements of “Throes” mark an interlude, while the dark lyrical world of “Trust” bounds onto the dance floor propelled by some pulsating synths. These are the moments people will remember on this record, and these are the moments you won’t find on Dark Eyes.

Perhaps it’s telling that Dark Eyes was focused on exploring darkness. They were really still teenagers back then, trying to find their tone, trying to find truth and beauty in what they do. They didn’t just succeed, they created a precedent for what beauty sounds like for them as a collective. On Sun Leads Me On they’ve found what they’re looking for: liberation of ideas as they delve deeper into music as a source of lucidity. “I’ve totally come to peace with what Sun Leads Me On is and I’m completely happy with it” says Isaac. He may have said it retrospectively, but there’s a sense they’ve always been at peace with the record they were making. Despite the fraught initial stages of Sun Leads Me On, it’s clear that whatever guided them on to its fruition has always been there, shining, ready to guide them should they determine to break out of the darkness. Perhaps the old cliché about difficult second albums is true for a lot of bands, but then perhaps the creative forces driving most second albums are unnatural, external and frustrating. Half Moon Run don’t feel pressured by anyone else’s standards of them, only their own.