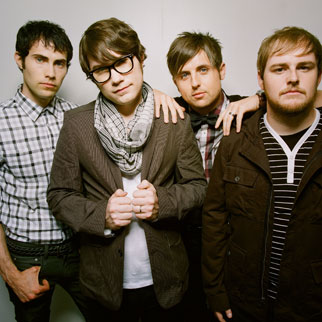 "What doesn't kill us makes us stronger" Frederich Nietzsche

"What doesn't kill us makes us stronger" Frederich Nietzsche

"We've only been together six years," says Hawthorne Heights drummer Eron Bucciarelli. "But it seems we already have a story worthy of a VH1 Behind the Music episode."

Indeed, the band's career has been pretty eventful since breaking out of Dayton, OH, with 2004's platinum debut, The Silence in Black, on the influential Chicago-based indie label Victory Records, on the heels of MTV and VH1 airplay for the single, "Ohio is for Lovers."
The 2006 gold follow-up, If Only You Were Lonely, debuted at #3 on the Billboard Album charts, producing the Top 10 Modern Rock smash, "Saying Sorry."

"I never feel complete without you/I'll never heal without you." "Bring You Back"

On Nov. 24, 2007, the world of Hawthorne Heights was turned upside-down when they discovered the body of guitarist Casey Calvert on their tour bus, dead from an accidental mixture of prescription drugs. A long, protracted legal fight with their label was finally settled, with the result the release of last year's Fragile Future, a highly personal album that dealt in large part with the group's reaction to the death of their band mate.

Hawthorne Heights now emerge from a self-imposed isolation with their eagerly awaited debut album for Wind-up Records, produced by Howard Benson (Three Days Grace, Daughtry, My Chemical Romance) at his Bay 7 Studios in Valley Village. It's an unflinching look at what has brought them to this place, executed with a firm desire to make the best of what they see as an opportunity for renewal by expanding their musical palette. Sure, there's the anthemic hard rock of "Bring You Back," with its aching feelings of loss, but there's also the funk-driven '80s new wave noir feel of "Nervous Breakdown," which describes the insanity of having your lives in the hands of the legal system, the eerie Johnny Cash country shuffle of "Gravestones," with Micah Carli manning the pedal steel guitar, the pop harmonies of "Picket Fences," the unsparing look at a recession-wracked heartland and the epic emotional scope of "Boy," JT Woodruff's autobiographical look back at a childhood in which his family was abandoned by an alcoholic father.

"Being on a new label liberated us," says Woodruff. "This album sounds like us, but we were able to grow our sound. We had the luxury of time to sit around and think about what we wanted to do, which helped us create something new. It's a way not to use the same
canvas every time."

"It's a fresh start, a new record company, new album, new perspective on life," nods Eron. "We're viewing it as a second chance. Not a lot of bands get the chance to right their wrongs. We're fortunate that Wind-up has taken us under their wing, loves our music and is really, really supportive."

"Bring You Back," refers to not only the loss of Casey, but to one of JT's high school classmates who committed suicide, the first time the teenager had to deal with the death of a contemporary.

"It was very hard for me to sing," he says, "because it connects me to so many different emotions and brings me back to that situation, which makes it all the more powerful. It's my way of showing people, we've been through this, and if you're going through something
similar right now, I feel for you."

Hawthorne Heights' resolve to survive regardless of the pitfalls comes through loud and clear on the defiant drive of "Here I Am," with Eron's thumping drums and Matt Ridenour's four-on-the-floor bass forming the rock-solid rhythm section, while Carli's grinding, buzzsaw guitars slice like a hot knife through butter.

"Back when we were in our angsty/I-hate-my-parents/rebellion period, it was all about Nirvana and Smashing Pumpkins," explains JT. "Lyrically, I wanted to get back to that 'Who cares?' attitude, that 'if you don't like me just move on.'"

"Boy" is even more personal, with JT channeling the hurt and anger he felt with his parents' abandonment. "You never thought she said/I love you like a son/I know your father's gone/And the damage has been done."

"We've had some hard lessons, which I wish we didn't have to experience ourselves, but it has made us appreciate what's important in our lives," nods Eron. "For us, it's back to the core values of friends and family. We're not focusing on the superficial bullshit, like money
and fame, which comes into the picture if you have a little bit of success."

The band continues to push the envelope on stylistic left-hand turns such as the country-flavored "Gravestones," the pop song craft of "Picket Fences" and the jittery dance groove of "Drive."

"We wrote more songs for this album than ever before," says Eron. "We wrote over 30, than whittled them down to the absolute best ones. We took parts from some and added them to others and made a Frankenstein out of 'em. We were always writing, re-writing,
arranging and re-arranging. Howard [Benson] really pushed us in the song writing department to go against what we've done in the past."

With all the travails of the last few years, Hawthorne Heights are just happy to get back to doing what they do best, playing for their fans, but not without reminding them that reality is never far away. In the deceptively calm, acoustic strains of "Picket Fences," Woodruff
portrays an America reeling under the worst economic recession in most of our lifetimes.

"This band isn't really about parties and fun," he says. "There are people out there who can't afford to put food on their table or gas in their car, let alone pay the bills. It makes you realize how small we are as individuals. Anything can be taken away from any one of us at any time.

"For this album, we took it down to the essentials, the skeleton of who we are as a band. We then tried on some new skins, and added the flesh and blood. We're just excited to play these new songs and see how people react to them."

To do that, Hawthorne Heights will hit the road, playing some of the same small, sweaty dives they once did as a novice group opening for Victory Records label mates Silverstein back when they started.

"Some of our best shows ever were in venues like these," says Eron. "The people packed in, the intensity. It's just a lot of fun. This will give us a chance to reconnect with our fans."

After everything Hawthorne Heights has been through, it will come as welcome relief.

"Luckily, we don't have to pay for therapy," laughs JT. "I just pick up a guitar and try to figure it out myself. But I'll be honest with you, it doesn't always work."

This time, it sure does.
Read more