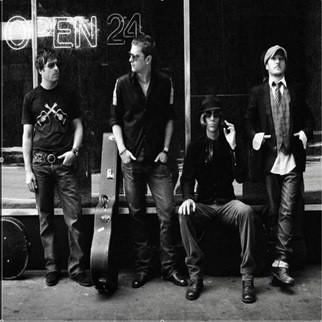 North is a direction. It's a place. It's a marker of progress -- and an intended destination.

NORTH is also the title of Matchbox Twenty's fourth album, the quartet's first release in five years, and their first album to debut at #1 on the Billboard Top 200 album chart. It is also the band’s...

North is a direction. It's a place. It's a marker of progress -- and an intended destination.

NORTH is also the title of Matchbox Twenty's fourth album, the quartet's first release in five years, and their first album to debut at #1 on the Billboard Top 200 album chart. It is also the band’s first set of all-new material in a decade. And like other connotations of the word, the 12-song set represents a determined journey, a carefully considered path that combines earnest melodicism with sly and even snarky fun as well as a new internal world order that has made Matchbox Twenty a tighter and even more collaborative band than ever before in its 17-year career.

"We approached this record a lot differently," attests front man Rob Thomas. "Rather than me just writing a bunch of songs, bringing them to the band and then us arranging them together, this was a lot of collaboration. A lot of the songs we wrote together, especially me and Paul (Doucette) and Kyle (Cook). We needed a little time to figure out how that works, how that dynamic works with three people who are used to writing alone. How do we get in a room and not kill each other?"

Doucette has the answer: "Taking our time was exactly the point. We were like, 'Let's use that to our advantage -- take our time, not feel as much pressure or any pressure and just write a lot of songs and see what kind of record we want to make."

NORTH finds Matchbox Twenty--Rob Thomas, Paul Doucette, Kyle Cool and Brian Yale - honed and fine-tuned, from the roof-raising arena-sized anthem "Put Your Hands Up" to the kinetic beat of "Our Song" to the rich craft of "Overjoyed and "Parade."  "EnglishTown" and "I Will" are the group at its balladic best, while Thomas thinks "Like Sugar" "sounds almost like a Dr. Dre tracked mixed with our band, really fresh." And then there's "She's So Mean," NORTH's high-energy, harmony-laden first single which is already topping the charts.

"We're a band that's just always respected craft," explains Doucette. "We really value craft in songwriting and craft in record-making. We pursued that maybe a little bit more on this record. It was less about being a band that sounds like we're just playing songs we wrote based off riffs and more about developing as a group of songwriters or a group of musicians who are used to working within the context of pop songs. We wanted to pursue that and see how good our craft was now, in our late 30s and early 40s, compared to how it was when we were 23."

It was pretty good back then, too, mind you. Formed inFlorida, Matchbox Twenty entered the world with a blockbuster -- 1996's YOURSELF OR SOMEONE LIKE YOU. The debut set spawned five hit singles -- "Push," "3 am," "Real World," "Long Day" and "Back 2 Good" and snagged an RIAA Diamond Award certification forU.S. sales exceeding more than 12 million to date. Thomas also raised the band's profile by co-writing and singing on Santana's Grammy Award-winning 1999 smash "Smooth." Matchbox Twenty maintained the momentum with MAD SEASON in 2000 and "MORE THAN YOU THINK YOU ARE in 2002, both of which went multi-platinum and continued to spit out hits such as "Bent," "Unwell," "If You're Gone," "Bright Lights" and "Disease."

But after three albums of hard work and equally hard touring, Matchbox Twenty was ready for a break. Thomas released a pair of Top 5 solo albums which contained several #1 singles, Doucette worked with his band The Break and Repair Method and wrote film music, while Cook led the New Left. The hiatus not only renewed Matchbox Twenty as a band but also seasoned the individual members even further as they came back together for 2007's EXILE ON MAINSTREAM, a greatest hits collection that sported six inspired new tracks which were co-written by the band for the first time ever and included their biggest selling single to date “How Far We’ve Come”.

In addition to more than 30 million records sold worldwide, Matchbox Twenty has also earned countless accolades, including five Grammy nominations, four American Music Award nods, the 2004 People’s Choice Award for “Favorite Musical Group, and they were named “Best New Band” in the 1997 Rolling Stone Readers Poll. What’s more, Rob Thomas has proven one of the most highly decorated artists of recent years, receiving three Grammy Awards, 11 BMI Awards, and two Billboard “Songwriter of the Year” honors for both his chart-topping solo work as well as collaborations with such legends as Santana, Mick Jagger, Willie Nelson and Big Boi.  Thomas’ collaboration with Carlos Santana on “Smooth” was also named the #2 Most Popular Song Ever on Billboard’s List of the 100 Most Popular songs behind “The Twist.” He was also named to Billboard’s Top 20 List of Hot 100 Songwriters 2000-2011 at #5 and was the top ranking artist/songwriter on the list.

"Matchbox Twenty existed a lot as a vehicle for Rob's songwriting in the beginning," Doucette explains. "Through the years Kyle and I have slowly started to write more and more songs. When we got back together we wanted to reflect that within the band."

Thomas acknowledges that the more collaborative method was "weird" for him at first. But the quality of the jointly written material made it easy to embrace the new path.
"You just have to leave your ego at the door," he says. "When you're in the room together it's just everybody throwing out their ideas at each other. You have to dare to suck, dare to say something stupid and dare to take things in a wrong direction, and everyone in the room has to follow that and let it go along until it becomes something. It's a little nerve-wracking but pretty damn exciting."

After EXILE ON MAINSTREAM's Top 5 success, Matchbox Twenty continued the collaborative process as it headed towards NORTH. Thomas, Doucette and Cook traveled between each other’s residences to put ideas together, then the entire group headed to Nashville to hunker down together in a cabin/studio -- a kind of songwriter's survivalist camp where Thomas says "you could wake up and you had the whole house wired for sound. You'd walk out of your room and there's a piano in the living room all mic’d up and ready to go." The music kept flowing, and before long Matchbox Twenty had more than 40 songs in various states of completion, which Thomas laughingly admits "got us even deeper into this hole of not really knowing what the hell we were doing! We could have made three or four distinctly different albums."
Enter Matt Serletic, the band’s trusted friend and longtime producer who worked with Matchbox Twenty on their first three albums. The group brought him to Nashville to help sort through the material and make his suggestions; before long, and perhaps not surprisingly, all concerned decided Serletic should once again take the producer's chair. The band then decamped for his Emblem Studios in Calabasas, California.

"Originally it wasn't going to be Matt producing the record," Thomas says. "He just came in as our friend to try to figure out what songs were really worth it. By the end of that night, at like three in the morning going through his copious notes, we were like, 'Hell, you should just produce this record.' "Doucette adds that, "Matt's basically family at this point, a really big part of our organization. We have a shorthand with Matt that we don't have with other producers...and he didn't want to go places we'd already been, either. Everything kind of took off once we made that decision."

Thanks to all the preparation in Nashville, the sessions at Emblem went smoothly and quickly, with a determined sense of how the songs should sound. The romantic "Overjoyed," according to both Thomas and Doucette, was "the first time we felt like we had something special,”.  Kyle Cook took lead vocals on the incredible ballad "The Way," which he and Doucette penned together. "She's So Mean," meanwhile, represents a "storytelling exercise" during which Thomas, Doucette and Cook sat around a microphone free styling lyrics that they eventually sculpted into the cautionary tale about a hard-to-handle woman who Doucette promises bears no similarity to anyone in the group members' real lives.

"No, not even remotely," he says. "The original lyrics weren't even about that, but once we came across 'she's so mean' it was like, 'OK, now we know what the song can be about.' We were just trying to write something fun, really." And the group has been both pleased by the out-of-the-gate positive reaction to the song.

Listening deeper to NORTH, meanwhile, reveals even more different nuances, approaches and feels because of the group-writing dynamic. "When I first played this record for my wife, she had a hard time figuring out which ones Paul wrote, which ones I wrote and which ones we all wrote because we all stepped into each other's skins," Thomas says. "That's really important because I didn't want it to feel like these songs were written by different people. I wanted them to just sound like the band."

NORTH will be sending Matchbox Twenty, back out on the road for the first time since EXILE ON MAINSTREAM, which saw the band playing SRO shows to their biggest crowds ever around the globe. The group once again hit the road this fall touring Australia, with North America in early 2013 and other territories after that. It's been awhile, but Matchbox Twenty has every intention to make it worth the wait.

"Matchbox Twenty is pretty all-encompassing," Doucette says. "Once it gets rolling, we just devote all our time and energy to that. I can speak for everybody on this; it's the thing we hold the most dear because it's the thing we built the longest, so we want to give it its due. We don't make records that often anymore, so when we do we want to devote our time and energy to not only doing it; but also bringing that music to the fans."