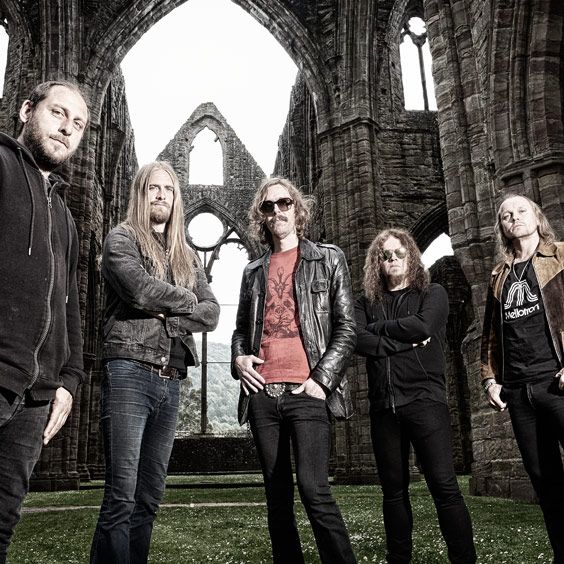 There are few bands that can or will match Sweden’s Opeth. Since forming in the tiny Stockholm suburb of Bandhagen in 1990, the Swedes have eclipsed convention, defiantly crushed the odds, and, most importantly, crafted 12 stunningly beautiful, intrinsically intense albums to become one of the...

There are few bands that can or will match Sweden’s Opeth. Since forming in the tiny Stockholm suburb of Bandhagen in 1990, the Swedes have eclipsed convention, defiantly crushed the odds, and, most importantly, crafted 12 stunningly beautiful, intrinsically intense albums to become one of the best bands on the planet; whether that be live or on record[A1] . Ask any Opeth fan. Enquire with any band that’s shared the proverbial pine with the Swedes. Or, get a label representative to talk Opeth. They’ll all tell you the same thing: Opeth are peerless. And they’re only getting better.

Opeth’s new album, Sorceress, their first for Nuclear Blast via the band’s [CD2] imprint[A3]  label Moderbolaget Records, is proof chief architect Mikael Åkerfeldt has a near-endless well of greatness inside. From the album’s opener “Persephone” to “The Wilde Flowers” and “Strange Brew” to the album’s counterpart title tracks “Sorceress” and “Sorceress II”, Opeth’s twelfth full-length is an unparalleled adventure, where visions cleverly and secretly change, colours mute as if weathered by time, and sounds challenge profoundly. Sorceress is, by definition, moored in Åkerfeldt’s impressive record collection—his one true vice—but, as always, there’s more invention than appropriation at play.

“This time around I didn’t think about what I wanted to do,” Åkerfeldt reveals. “I was forced to write. But once I started, it was easy. This record, like the last record, didn’t take long to write. Like five or six months. The thoughts behind this record developed as I was writing. The only thing I was thinking about with this record was to write that songs didn’t musically connect. I made sure if I had a song that was new sounding for this record, I’d make the next song completely different. I think the songs are very different from one another. It’s very diverse.”

Certainly, every Opeth record has had diversity. In 1995, Orchid reset the rules of death metal. Six years later, Blackwater Park hit the high note for musicality in a genre generally devoid of it. Damnation, in 2003, was the work of a band determined to upend the norm. Five years after that, Watershed closed Opeth’s chapter on death metal by visiting its darkest corners and holding its native brutality aloft. And in 2014, Pale Communion officially bridged the progressive music gap by twisting the intrepid sounds of ‘60s, ‘70s, and ‘80s into contemporary brilliance. So, really, what’s so different about Sorceress?

“My music taste got a little wider,” grins Åkerfeldt. “I started listening to jazz. I bought a lot of Coltrane records. I never really thought Coltrane would be for me because I like ‘dinner jazz.’ I like comfortable, soft, nice, and lovely jazz. Like Miles Davis’ ‘50s stuff. Porgy and Bess, for example. I guess Dave Brubeck fits in there, too. So, that’s the only new influx of musical inspiration for me. Other than that, I’ve been buying the same type of records I always have. Prog, symphonic rock, singer/songwriter, metal, hard rock… But there wasn’t anything that set me off like The Zombies or Scott Walker. Nothing got me going this time.”

Actually, that’s not entirely true. Åkerfeldt’s always mining for progressive gold. Good, rare music is particularly good at getting his motor running. He found double-gold in one-off Italian outfit Il Paese dei Balocchi and Bobak, Jons, Malone’s ultra-obscure Motherlight album. To wit, get Åkerfeldt talking about either and he’s all too pleased to discuss the finer points of Il Paese dei Balocchi’s string-based darkness or how he fan-boyed Malone via email to get the famed British orchestrator and one-time Iron Maiden producer to contribute to Sorceress.

“I absolutely love Il Paese dei Balocchi,” Åkerfeldt professes. “They did one album. It’s insanely good. It has everything I love about progressive rock in it. This album is so orchestrated and epic. It’s got lots of string sections. It’s very moody, dark, and sad. It’s a mystery they didn’t do any more. As for Will Malone, he did the strings and stuff for the Sabbath records—Sabotage and Never Say Die! But now he does strings for pop artists like Joss Stone, The Verve, Depeche Mode. I looked him up, mostly because he was the house engineer for Morgan Studios in the ‘60s. He was also in a few bands. Like Orange Bicycle and played on the Motherlight album. He also had a solo record, which is also amazing and superbly rare. It’s orchestral. The bulk of it is strings. It’s kind of like Nick Drake.”

Åkerfeldt’s quick to point out, however, his newfound progressive music loves didn’t directly inspire him to write Sorceress. The majority of the album was penned in Opeth’s rehearsal space, where, nestled comfortably in a corner, a computer, a keyboard, and a microphone sit ready for the next Opeth epic. It isn’t plush, but it’s exactly the type of environment the frontman needs to focus his creative self into song.

“When I’m in a writing mode, I have tunnel vision,” says Åkerfeldt. “I have a really good work ethic. I go down to the studio everyday early in the morning and I work. I absolutely love it. It’s so much fun. It’s much easier now, too. I write complete demos. I sequence the songs in the order I want them to be on the record. I do mixing. I do overdubs. Once I’m done, I give copies to the guys so they can listen to the album. They practice to it on their own. When it’s time to go into the studio, everybody does their own thing. It obviously works.”

For Sorceress, Opeth returned to Rockfield Studios in Wales, where the Swedes had tracked Pale Communion in 2014 with Tom Dalgety. The experience was so positive and historical—the countryside studio was also home to pivotal Budgie, Queen, Rush, Judas Priest, and Mike Oldfield recordings—there really was no other option for Opeth and crew. Rockfield Studios or bust! The studio, with Dalgety yet againin tow, provided the necessary isolation, the right bucolic atmosphere, the best gear, and three square meals a day for Sorceress to come out the other end spitting fire. All in 12 bittersweet days, too.

“There was a time when I came out of our recordings a wreck,” Åkerfeldt bemoans. “But now I come out with a wish. I wish it wouldn’t have gone so quickly. There’s emptiness after I leave the studio. I love writing and recording in the studio. It’s lovely at Rockfield. It’s in the sticks. It’s got horses and cows. There’s lots of sheep in Wales. But the studio is just a studio. It’s so beautiful there. So quiet. It’s a residential studio as well, so we live there while we’re recording. We have chefs for us, too. So, we can just be there, playing, recording, and hanging out.”

If life is like a Peter Max poster, the lyrics to Sorceress aren’t. There’s color, but they’ve been treated, corrupted, and befouled. That is to say, they’re much darker. Some of bleak lyrical tones stem from Åkerfeldt’s personal life—and are thusly contorted beyond recognition—while others touch grimly on topics like love and what happens to people on the other side of it. In fact, some of the lyrical ideas are similar to what was happening on Blackwater Park.

“I made sure to write good lyrics,” Åkerfeldt laughs. “This sounds very old-fashioned black metal to say, but the lyrics are misanthropic. It’s not a concept record, so there’s no theme running through the record. Most of the record deals with love. The negative aspects of love. The jealously, the bitterness, the paranoia, and the mind games of love. So, it’s a love record. Love songs. Love can be like a disease or a spell.”

Luckily, for Åkerfeldt and crew—bassist Martín Méndez, drummer Martin Axenrot, guitarist Fredrik Åkesson, and keyboardist Joakim Svalberg—the lineup doesn’t have to deal with Sorceress’ main theme. They’ve been together since Heritage was completed, and according to Åkerfeldt he’s not been in a better band situation before. Not since Orchid. Not since Still Life. Not since Ghost Reveries.

“It’s the best band situation I’ve ever had. Fans will look at our eras and have their favorite lineup, but this is the best. Even the happiest days of the first and second lineups aren’t comparable to what I have now. We never fight. It’s like a good work team. We know each other professionally and personally. As much as we’re a band, we’re also friends. We hang out when we’re not doing Opeth.”

A core team is a good thing, when Opeth’s credibility is in full view of fans and critics. Åkerfeldt’s very aware of what the masses have had to say about Opeth since Watershed. While some disliked the musical shift on Heritage, most have applauded it. They’ve come to expect something new from Opeth. True to form, Sorceress will give long-time fans and weary critics reason to re-think Opeth and what it takes to be musically fearless.

“I hope they’ll like the record,” posits Åkerfeldt. “I can only talk from my perspective and taste here, but we offer diversity that’s not really present in the scene today. Whatever genre. We’ve always been a special band. We’ve gotten a lot of shit for being different. We still do. Our time will come, I think. It comes down to perseverance. It comes down to not giving up or giving in to public opinion. Music is about doing your own thing or going your own way.”