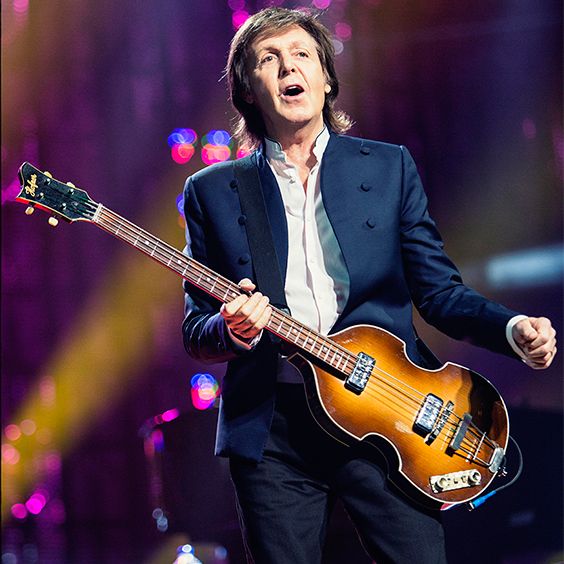 Paul McCartney was born in Liverpool on 18th June 1942. He was raised in the city and educated at the Liverpool Institute.

Since writing his first song at the age of 14, Paul McCartney has dreamed and dared to be different. In the sixties, as the writer and co-author of their greatest songs,...

Paul McCartney was born in Liverpool on 18th June 1942. He was raised in the city and educated at the Liverpool Institute.

Since writing his first song at the age of 14, Paul McCartney has dreamed and dared to be different. In the sixties, as the writer and co-author of their greatest songs, he changed the world of music with The Beatles. Legendary albums include: Please Please Me, Revolver, Help!, Sgt. Pepper’s Lonely Hearts Club Band and The White Album. Paul has continued to push boundaries over the last 30 years, first as a solo artist, then with Wings (with albums that included Band On The Run and Wings At The Speed Of Sound) and following that as a solo artist again, with recent highlights including 2013’s global hit album NEW. 2014 saw Paul release Hope For the Future, the title track for the record-breaking video game Destiny.  In 2015 Paul’s collaboration with Rihanna and Kanye West, FourFiveSeconds, dominated the charts across the world.

An 18-time Grammy winner and recipient of The Recording Academy’s Lifetime Achievement and Trustees Awards, McCartney’s list of international accolades reads like no other: 2012 saw Paul adding the MusiCares Person of the Year to this unrivalled list. The award recognized both his incomparable creative achievements and his lifelong commitment to charitable work, which includes decades’ worth of philanthropic activities for PETA, LIPA, One Voice, The Vegetarian Society, Nordoff Robbins and Adopt-A-Minefield—not to mention his participation in historic benefit concerts including Live Aid in 1985, The Concert for New York City in 2001, Live 8 in 2005 and 12-12-12.

In 2010, Paul made two visits to the White House, receiving singular honors on each trip. In June of that year he performed in front of President Barack Obama and his family while becoming the first-ever British recipient of the prestigious Gershwin Prize For Popular Song.  Paul returned to the White House that December (where even the President joked about Paul becoming a regular) to receive a Kennedy Center Honor.

Equally renowned for his live performances as he is for his songwriting, Paul McCartney has performed sold-out concerts to millions of people all over the world winning rave reviews along the way.  His last world tour, Out There, which commenced in 2013 and came to an end in late 2015, saw him perform 91 concerts in 19 countries to over 2.7million people.

In March of this year Paul announced his all new One On One tour, which will commence in the US on Wednesday April 13th.

A freeman of The City Of Liverpool and Lead Patron of The Liverpool Institute Of Performing Arts, Paul McCartney was appointed Fellow of The Royal College of Music in 1995 by The Prince Of Wales. In 1996 Paul McCartney was knighted by H.M. The Queen for his services to music.

As with the launch of every new Paul McCartney tour, One On One promises to unveil a dazzling re-designed set, dozens of classics from the most beloved catalog in popular music, spanning Paul's entire career--as a solo artist, member of Wings and of course as a Beatle—and no shortage of surprises.

One On One is the first new Paul McCartney tour since the juggernaut that was Out There came to its stunning conclusion on October 22, 2015 with Paul’s first ever concert in Buffalo, NY. Out There’s finale capped off an incredible 2015, in which the tour played 27 shows in 22 cities throughout the world, with highlights including Paul’s historic debut in South Korea—where the crowd at Seoul Olympic Stadium’s refusal to stop singing the refrain to “Hey Jude” literally forced Paul to reprise the song in the first encore, playing that signature bassline live for the first time—three nights at the Tokyo Dome and one at Budokan, a sold out stand at Paris’ majestic Stade de France, more than a dozen packed arena shows across the U.S., UK and Europe, and triumphant headlines at festivals such as Firefly, Roskilde, and Lollapalooza in Chicago—the latter a tour de force performance for a 100,000-strong crowd featuring a guest appearance from Alabama Shakes’ Brittany Howard on “Get Back.”

The Paul McCartney live experience is everything any music lover could ever want from a rock show—and so much more: Nearly three hours worth of the greatest moments from the last 50 years of music, dozens of songs that have formed the soundtracks of our lives. Paul and his band have played an unparalleled range of venues and locations: outside the Coliseum in Rome, Moscow's Red Square, Buckingham Palace, The White House, a free show in Mexico for over 400,000 people, the last ever show at San Francisco’s Candlestick Park where The Beatles played their final concert 1966, and even one performance broadcast live into Space! Featuring Paul's band of the last 10+ years – Paul "Wix" Wickens (keyboards), Brian Ray (bass/guitar), Rusty Anderson (guitar) and Abe Laboriel Jr (drums) – the show is never anything short of life-changing.

The 2016 One On One Tour will debut a brand new production, as always utilizing state of the art audio and video technology and to ensure an unforgettable experience from every seat in the house. Employing massive screens, lasers, fireworks and, of course, a staggering selection of the best songs ever written or performed, every Paul McCartney show promises a once in a lifetime evening that transcends and elevates the potential of live music.