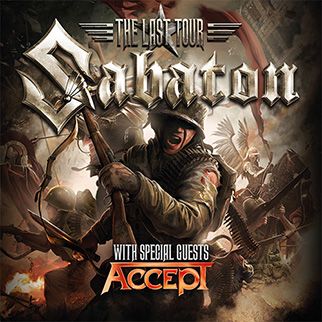 We are Sabaton. We play heavy metal. And this is...
...an introduction to one of the most unique, exciting and beloved bands in modern metal.
It was a familiar enough beginning: a group of teenage friends in a small Swedish town decided one day to start a band. But in the 19 years since then,...

We are Sabaton. We play heavy metal. And this is...
...an introduction to one of the most unique, exciting and beloved bands in modern metal.
It was a familiar enough beginning: a group of teenage friends in a small Swedish town decided one day to start a band. But in the 19 years since then, Sabaton has carved out a reputation as one of the hardest working bands in the business – gaining a legion of loyal fans across the globe, delivering eight highly-rated studio albums (two of which –Carolus Rex, 2012, and Heroes, 2014– are certified platinum-sellers), and scoring multiple industry award wins and nominations... not to mention launching their own annual festival and cruise.
Combining soaring power riffs with vocalist Joakim Brodén’s instantly-recognisable gruff baritone, the band refuses to be simply slotted into a genre. Fans need only know them as Sabaton: the heavy metal band that sings of real life wars and the people who played a part in them – of gruelling campaigns and dazzling acts of bravery, of magnificent victories and touching personal struggles – true stories more fantastic than any fiction.
The band’s name – a piece of medieval armour – is a happy coincidence, because war was only chosen as a lyrical theme after the music for 2005’s Primo Victoria (a solid fan favourite in the band’s live sets to this day) was written. Bass player Pär Sundström explains: “Up to that point we were pretty much just having fun and writing about typical ‘metal’ stuff, but with Primo Victoria we knew we had something special, and lyrics about drinking beer or riding motorcycles would not do it justice. We needed to pay tribute to something serious, and at that point Sabaton as we know it was born.”
Each new album continues the theme of war, and has a strong central concept, ranging from Sun Tsu’s iconic 2,000-year-old book on warfare (The Art of War, 2008)to bringing thestory of Sweden’s little-known empire to the metal world (Carolus Rex, 2012). Chief songwriters Brodén and Sundström take the process of researching each set of lyrics very seriously, often inspired by fans asking them to write about a military story from their own country. Anthems such as 40:1 and Cliffs of Gallipoli, celebrating specific moments in history, have won Sabaton a dedicated fan-base in countries from Poland to Australia, and beyond.
Sabaton are perhaps best known for their electrifying live concerts, combining accomplished musical performances and a finely-crafted stage show – usually with full-sized tank drum-riser and as many pyrotechnics as the venue will legally allow – with unlimited energy and laughter. The band is rarely off the touring circuit – headlining as far afield as North America, Australia and Japan, and filling arenas and taking top-billed slots at festivals across Europe. They are also a favourite support act for metal titans including Iron Maiden and Scorpions. Sabaton’s live show has won top industry accolades in Germany (Metal Hammer Awards: Best Live Band) and their native Sweden (Bandit Rock Awards: Best Swedish Live band – won twice), as well as being nominated for two Metal Hammer Golden Gods awards in the UK.
The band recently finished The Last Tour, which was named for their latest album The Last Stand. The tour lasted three years and took the band all over the world. They show no signs of slowing down, but have cooled down their touring slightly this Autumn to work on their next studio project.